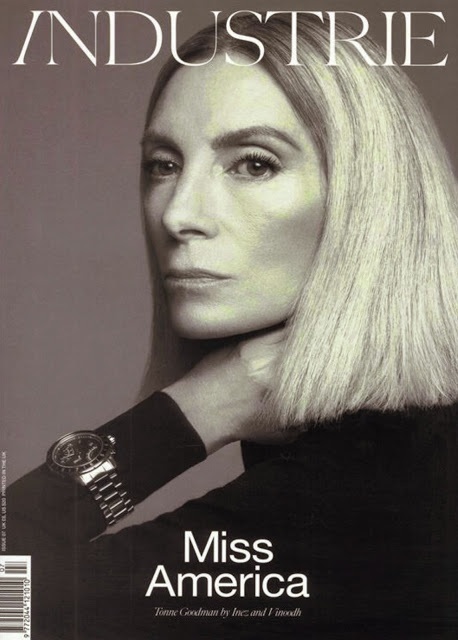 Very few people might recognise the name Tonne Goodman, but you would know her face. Always in the shadow of Vogue’s editor in chief Anna Wintour, Tonne came into the public eye after starring in the documentary film The September Issue which showed Miss Goodman’s sharp eye and no nonsense attitude – all traits Miss Wintour values. But unlike Anna Wintour, Tonne doesn’t hide her icy glare behind oversized sunglasses, making her perhaps the real ice queen of the publication.

Noted as the master of minimalism at Vogue, she has been hailed by Miss Wintour for her “inimitable sense of all-American clean chic. In fact, she has taught a generation of actresses how to be classic and cool and right for their times. The greatest escape, they learn . . . is to be true to yourself and gorgeous along the way.” Signalling that there is a Vogue magazine well and truly after Anna Wintour.

And maybe that’s why Tonne is jumping into the spotlight by scoring the new cover of Industrie magazine. The Vogue fashion director enlisted the highly noted photographer duo Inez & Vinoodh to capture the former model’s glare for the publication’s seventh issue in a simple black and white photo.

Standing by what longtime collaborator Mario Testino described her as “If anyone defines the phrase ‘less is more,’ it’s her.”, Tonne cleverly sets herself up as the star of the shoot, free from any distractions. But most importantly she practices what she preaches, putting her in line to be the next powerful woman at Vogue.